Lich does not respond to inputs in VCO patches

Hi there.
I built a Lich DIY and had some minor issues after the build. Smoke test was ok, calibration was also ok. No errors shown. The only thing, that did not work out of the box was the pot A. It did not change the pitch of the VCOs, only completely counterclockwise and the first 2 or 3 mm there was a little change (pitch went up, strange). I disassembled the OWL board and the two PCBs and the ICs, cleaned everything, checked, if everything was soldered or if I could see any shorts: Everything looked nice.
Assembled again, et voila, the pot A did work.
Tried some patches, but the input B behaved a bit funny in some patches: For example, in the polygonal VCO I had to pull the plug out a bit of the jack to work and push with the tip against the jack but without snapping in. After an update of the firmware (something from 20 to 22) everything worked just fine. Now I also tested the MIDI functions in the polygonal VCO patch: Nice, it worked. Didn’t work with the v20 firmware either.
So at this point everything seemed just fine. That was yesterday.

Now today I played a bit around with the Lich (again the polygonal VCO… nice patch btw, I like it a lot

) and now the both input jacks don’t work anymore. Neither the 1V/Oct nor the other one. They did work yesterday though.
The (at least for me) strange thing is, that they work in other patches, for example the Reverb and the Delay patches from befaco. So I think, it cannot be a hardware problem?!?!?

What could be the problem of my Lich? Any ideas?
Any help is appreciated

BTW, below is the output of the firmware updater. What about the “Invalid SysEx”? Is this normal in boot loader mode?

Thanks a lot for your help in advance. 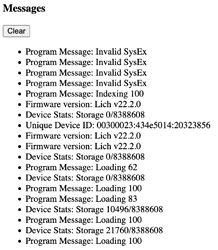 Ok… perhaps it’s solved. I calibrated once again and now it seems to work