My Lich is just a struggle

I have had my Lich for a few weeks to a month and the entire time trying to work with it has just been agony. It makes me sad because there are so many cool things that can be done with it, I just don’t know if I’m missing something or if I have an especially fucked up unit or what.

After I built my lich I tried to calibrate, could not calibrate, cue hours and hours of looking over my solder job and the schematic before finding and digging through the forum and finding out that the owl board I was sent has a firmware that just does not work with the Lich.

something like 20 or 30 firmware flashes later, not an exaggeration, I had a calibrated unit and could start putting patches on and messing with it. Since then I have worked with it for extended periods on 5 or 6 occasions and it has always gone the same way. Most of these sessions have been between 1 and 3 cycles of me loading up and messing with patches before the Lich decides it’s going to flush and/or corrupt its memory before I have to spend an extended period flashing and erasing memory before it decides it wants to work and calibrate again, and somewhere along the line I just give up and stop using the module at all.

I’m frustrated right now so a couple things here might be very very minor exaggerations here but this basically my entire experience with the module. Am I in the minority here? Am I doing something wrong? Am I just supposed to do this over and over until I have a solid lists of patches that actually load and function and then never plug it into my pc again? I’m just about done, so any sort of suggestions would be appreciated because the potential of this module is awesome and the reality of it has been a fruitless major time sink.

I’m sorry you’ve had a hard time. I’m also somewhat new to OWL by way of Lich and had a few of the issues you experienced. I my case, my Lich kit included a bad potentiometer that made the Lich unusable. I couldn’t calibrate it and flashing new firmware, which is a pretty painless process with the web tool, didn’t resolve my issues. So I finally did some tests and realized that one pot was just not tracking values correctly. I contacted Befaco and they just sent me a new pot. That resolved my ability to calibrate and use the module effectively.

You apparently have other issues but contacting Befaco for support might be your best option.

EDIT:
The only other advice I could give you is that OWL is a development platform that is being developed by a small company with limited resources. You need to be careful that the patches you upload to your module do not exceed it’s memory or processor. Stick to patches specifically developed for the Lich. Also, not every language/platform that OWL “supports” is “fully supported”. You’re responsible for identifying the limitations and optimizing your patches.

Stick to patches specifically developed for the Lich.

That’s not really an issue. There’s literally just 1 patch in the library that is intended to run on more powerful hardware (Genius), everything else should be compatible with Lich. Of course some of them won’t match with available physical controls (i.e. Magus has 20 parameters that can be configured as input or outputs), but performance should not be a problem.

Thanks for the clarification antisvin. Lich can defiantly handle most of the public patches in the Patch Library. The comment about making sure not to exceed the processor was really aimed at any code/patches that op might be developing.

It still seems like it might be a good idea for iidexic to test official patches tagged with Lich and simple test patches, to help debug hardware issues.

I made this post while i was just really frustrated and I might just delete it if there’s a way to as it’s not very constructive.

As far as my unit goes, the build is correct and now that I’ve decided to stick to an older build completely I’m hoping I will at least have a working unit. This older build seems to not have the corruption problem but I guess time will tell.

It does seem like there are quite a lot of patches that will either cause the lich to error out or cause other issues when loaded and I’m not sure what to do about that.

I don’t think it’s necessary to delete the post, it’s better to wait for @mars to see it.

Btw, if you’re running older firmware version, at some point of time there was a regression that caused a failure when loading patches from storage (somehow they didn’t fail if they were loaded to memory from the web patcher). It was fixed in newer releases, but they have some other problems. I think that V/Oct calibration might be not possible at the moment among other things. Hopefully this would be resolve in the next firmware update.

Yeah, I can’t get the newer versions to work. If I load them then yeah there are a lot of issues, although on the version I have it on right now I can’t actually really connect to it without my browser freezing so it’s really not in the best spot either way. I’m really hoping I can enjoy using this thing at some point because it seems really cool.

And just to clarify, I have gotten it into a state where it works a number of times, but every time I have connected it after that to add or change patches it ends in corrupting and spending an hour or two getting it workable again. Adding patches is just like running through a minefield, and it’s not just the patches themselves that can be the issue.

Well hey I’m back again. Decided I wanted new patches on my Lich. Forgot how much pain that would require.

Does anyone know how to force storage to be erased when the patch library says there is 0 space being used but can’t write new patches because there’s data in the way. thanks

Depending on the firmware the “Erase Storage” button either does nothing or crashes to bootloader.

hi @iidexic
Sorry you’re having a hard time with your Lich, and thank you for persevering. There is light at the end of the tunnel, I promise!
When trying out patches, we strongly recommend using ‘Load’ instead of ‘Store’. ‘Load’ runs the patch without storing it to flash memory, and if you don’t like it or it doesn’t work then you can just load something else instead. And worse case, if it resets your Lich, it will just restart precisely as it was.

One thing I’m wondering, if you’re having strange, non-repeatable failures, is if there’s some issue with your power. Have you got many other power-hungry modules in your rack, are they perhaps competing over a limited supply?

Also I will absolutely take a large share of the blame. Some firmware releases have been buggy, and there are a lot of things in the platform that could be improved - and better documented!

Maybe we can crowd source some quality control. I have just published a firmware release candidate: Release v22.5.rc2 · RebelTechnology/OpenWare · GitHub

It includes a fix for the USB Host problem that we had in the previous version. Incidentally it also seems to fix the perennial USBH reconnect issue - bonus! However I have only been able to test this on a pre-assembled Lich, i.e. not the kit version.

So to anyone with an OWL device who reads this: if you can, please test, and tell us how it goes.

I might have to pass this one as I’m parted with my murder of OWLs for the next couple of weeks.

But it looks like it would Genius would still crash if you send a negative output CV value because there’s no truncation of any kind. This is something that I’ve ran into before, I recall that a simple __USAT(value, 12) resolved it as expected.

I’ll be straight up, I have ended a lot of my longer attempts to work with the lich in very very bad moods and that’s where a lot of my posts in this particular thread stem from. I am however very interested in the module and the platform; I think it’s very ambitious and I really appreciate the amount of work and support people like you and @antisvin (who has been continuously incredibly helpful so thank you for that) provide.

I will check for potential power issues and I do have some weird bugs now and again, but the lich was one of my very early modules and the issues have been present since I had a lot of power to spare.

The somewhat overarching issues I have had since building the module are:

The corruption occurs even when I verify patches are working perfectly - I test by loading but I can’t always have my lich attached to the PC so I’d like to be able to save a good number. I would really just like the lich to get it to a point where v/oct works and the progress I make setting the module up doesn’t randomly and repeatedly vanish.

I’ll let you know how 22.5rc2 works out - it should at least be nicer to work with but honestly calibration (v/oct) is what really is keeping me on the earlier versions.

firmware 21.0 works. Firmwares 22.0 and beyond get an invalid flash resource error, including 22.5rc2.

I’d appreciate some pointers because it seems this is the case regardless of the series of events.

Edit: may have actually found an assembly error on my part

I basically have the upside-down A all the time, forget what causes that one but it hasn’t seemed to have changed above behavior

There isn’t an “upside-down A” among characters that Lich displays, so it most likely is some hardware issue. 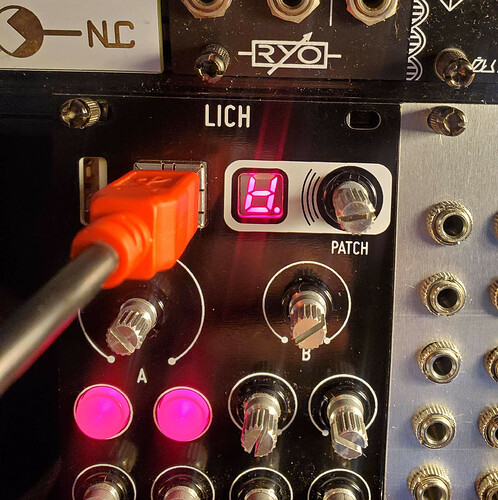 image2558×2568 884 KB
So this is what I see, for a split second on every startup. This, then L, then on working firmwares the patch number pops up, on more recent firmwares E pops up. This is also not the first time the upside-down A has been mentioned on this forum.

If this is a hardware issue are there any potential places to look? I have spent a very long time staring at this board and I feel like I’m getting tunnel vision.

Thanks for the help