So I’ve got this MIDI controller by Korg called the nanoKontrol2. It’s cheap, the buttons feel nice and it’s got eight MIDI sliders. I figured this would pair well with Magus, and I’ve made a patch that uses the nanoKontrol2 as a frontend for an 8-channel, 8-note sequencer: 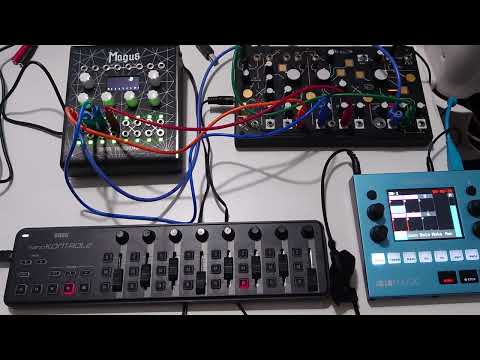 This video doesn’t show most of the sequencer’s features, but I’m using it here to sequence two notes at once on the Strega (usually a difficult device to sequence because one of the oscillators is not 1V/OCT…). In other tests I’ve used it to sequence a bunch of the Strega’s parameters at once with good results.

The patch is here (with documentation in the github repo here), and some of its features are:

Features that don’t work/could work, but might require changes, support or fixes in a future OpenWare version:

Nice! This is what you get when you don’t want to get a 0-CTRL for your Strega

On devices with fewer than 8 outputs

For the time being, every available OWL device but Magus has 0-2 CV outputs, since STM32 MCUs have 1-2 DAC channels. Obviously Magus has an external chip (MAX11300).

The point of the “click track” was to sync a Pocket Operator drum machine, but in my testing I can’t get the pocket operator to recognize it yet… I think maybe the click track click has to be very long.

I’m not sure if it’s about length, but it may expect a bipolar signal. I suggest configuring PO as a master and looking at its sync output to understand what it uses for sync.

Nice! This is what you get when you don’t want to get a 0-CTRL for your Strega

Well you can always connect VCMC to anything with USB host or serial MIDI input and it’s programmable as the firmware is open. Of course having an OWL instead of Teensy in that module would make things way more interesting, but I don’t think they anything like that planned at the moment.

i was also thinking a bit more beefy controls for live gigs - like buttons, pads, touchpoints, knobs and sliders of course